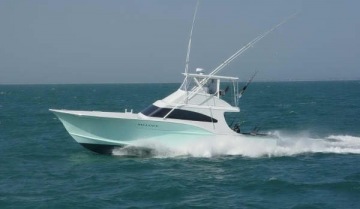 The Reliance is equipped with heat/AC, full bathroom with shower, stereo, and comfortable seating. The cabin below is trimmed with cherry and has bunks for those who partied too much the night before. On the bridge, the boat has all the latest navigation equipment such as radar, plotters, GPS, color bottom machine, radios, and autopilot. The Reliance also has excellent tackle, outfitted with Penn and Shimano reels on custom rods ranging in size from 15 lb to 130 lb class.

Captain John Canning, III has been on the deck of the Reliance for 4 years. This year he will be back as the deckhand, but he will also be running the boat occasionally now that he has earned his USCG license.

Please contact the Marina after you place your order to verify the charter reservation.